At first appearance Nepal is a seemingly the last place on the planet that you would expect to find rhinos, elephants, tigers and crocodiles. Known mostly for its mountains, Nepal’s subtropical jungles may surprise people at first. Yes the country is home to more of the world’s highest peaks than any other country, including the impressive Mt. Everest, but just 193km away to the south of the majestic Himalayas is the lush and tropical terai.

Being around 100m above sea level and steaming hot the forests and grasslands of the lowlands are some of the most diverse and productive ecosystems in the world. It is here that large numbers of some of Asia’s most iconic and rare animals live. With the rich nutrients washed down from the Himalayas every year during the monsoon and carried in the melt water every spring the rivers that run through the terai and onto the Gangetic plain in India are left in the soil here when the rivers flood. These annually flooded plains (alluvial) help to produce grasslands that help support hundreds of Indian one-horned rhinos, large numbers of Asiatic elephants, guar and their predators, including tigers.

It is some of these animals that we will target as high priority species when we are exploring the park, but along with the rhinos, elephants and tigers the park is home to many sloth bears, leopards, langurs, macaques, wild boar, various deer species, hundreds of species of birds and some also one of the world’s rarest species. The huge and critically endangered gharial. This crocodilian has less than 250 mature individuals in the world, with Chitwan harbouring over half of the world’s population. 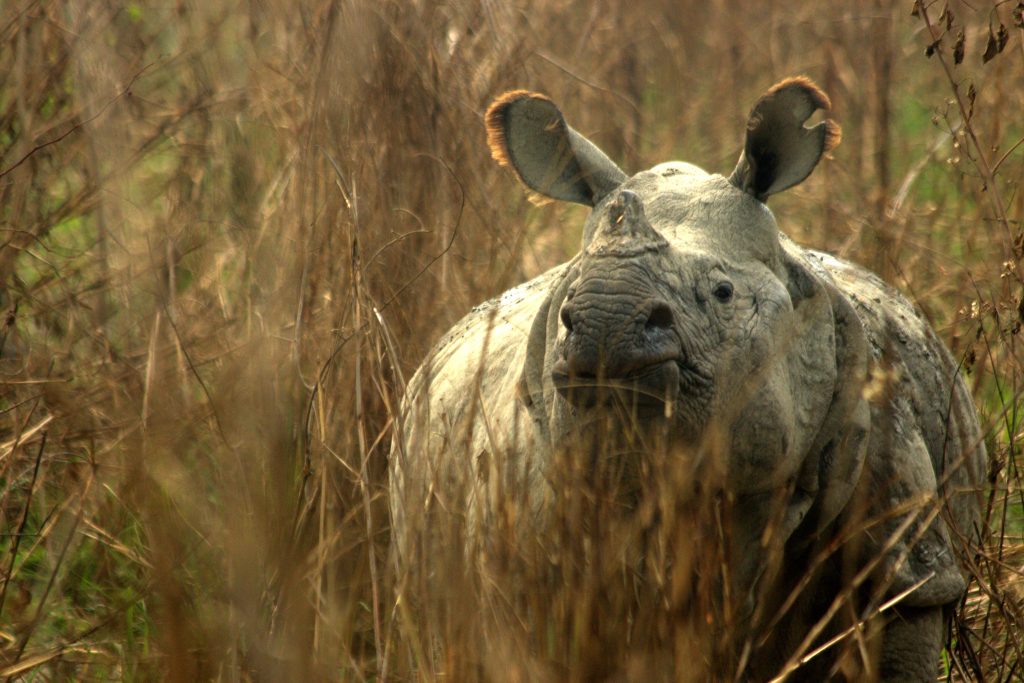 In fact Chitwan has a very good success rate when it comes to conservation with large numbers of rhinos rebounding from a low in the 1940’s and tiger, leopard, bear and elephant numbers all increasing over recent years.

Whilst also in Nepal you will be taken around the historic and bustling city of Kathmandu, located in the Kathmandu valley (roughly halfway between the Himalayan peaks and the lowland Terai) and was once three separate kingdoms that were united under the powerful king Prithvi Narayan Shah. From then on the city has grown and grown. Now a major tourist hub and melting pot of travellers, trekkers, locals and businessmen we aim to show off some of the city’s most fascinating sites.

Chitwan is also one of the few places where you can experience jungle safaris looking for tigers in a variety of different ways. This tour will take you into the heart of tiger territory in Jeeps, on elephant back, via canoe trips and most thrillingly on foot. All this with the expert help of local expert guides; so you can be assured of finding as much as possible and also being able to understand the behaviour of the animals we see in the forests and grasslands here.

By spending the amount of time you will be exploring Chitwan National Park you will be all but guaranteed to see signs of tigers, rhinos, gharial and wild Asiatic elephants. But it is not just the wilderness of Nepal that is fascinating about this country; so as well as the wonderful terai region you will also be taken around some historical sites in the wonderful city Kathmandu such as the ancient Boudnath Stupa, holy site of Swayambunath and Durbur Square.

Whilst on this particular trip the large mammals are major focus of this trip; with tigers at the heart of everyone’s wish-list in Chitwan. They are not seen here as often as in some Indian parks but that adds to their mystique and overall appeal. Anywhere that tigers can be seen very easily is not the best habitat for the tiger to be living in. So we try and we walk and we drive the roads and trails through the grass and forests of Chitwan in search of one of the 120 plus tigers that live in the park and surroundings forests. As well as the tigers we have an excellent chance of seeing some of the other large wildlife in the park such as Asiatic elephants, India one-horned rhinos, Gaur and possibly Wild water buffalo as they have been recently re-introduced to the park. Once again (as with all Royle Safaris trips) we will employ the best local guides at each national park who will try and find as many species and interpret the amazing behaviour we see.

This budget wildlife watching tour is one of our range of tiger safaris we are world leaders in these specialist mammalwatching holidays, with expert guides and more time spent looking for targeted species than other tours, Royle Safaris is ideally situated to maximise mammal sightings and with our scientific background we are at the cutting edge of rare and elusive mammal sightings and can establish sustainable ecotourism in some of the best rare mammal watching destinations in the world.

If you would like to know more information about this Wild Nepal Budget Chitwan Tiger Safari you can click here or contact us in addition to booking places on our small group tour we can also arrange private tours for any party size from 1 person on a solo trip to 10,  people on dates you choose (subject to availability).