Eastern India is often seen as the poorer cousin to Central, Southern, Northern and Western India in terms of wildlife watching, particularly for mammals. Whilst the Sunderbans and Kaziranga National Parks are well known for wildlife there is far more around here that these forests of Eastern India have to offer anyone wanting to participate on a Wildlife Holiday to Eastern India. Unlike the tiger rich parks and reserves of Central India (particularly Madhya Pradesh), the Himalayan and foothill parks of Corbett and Hemis and the desert ecosystems of Gujarat that are full of species found nowhere else in India; the eastern forests are more similar to the southern forests. Here and there are many endemic species and various mammals, birds, reptiles, amphibians and plants that are found nowhere else on earth. The north east of India is one of the most biodiverse areas of the world and we have developed this general wildlife watching holiday (focusing neither as a strict Birding Holiday or Indian Mammal Watching Tour) that fully explores some of the best forests and grasslands of eastern forests. 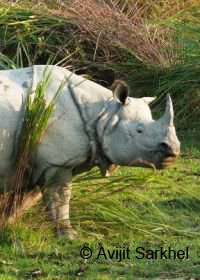 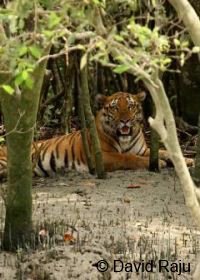 Tiger in the Sunderbans 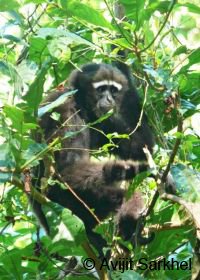 This Indian Wildlife Safari starts and leaves from Kolkata, the largest city in eastern India and heads to the world’s largest mangrove forest in the world the Sunderbans. Here you will stay inside the forest and enjoy boat safaris in the morning and afternoons, this forest is home to some one of the largest populations of tigers in the world and also huge crocodiles, Irrawaddy dolphins and many species of water birds. From this Sunderbans Safari we will head back to Kolkata and then north towards the rich and diverse grasslands and forests of the north east. Here you will enjoy Safaris of Kaziranga, Manas Safaris and Gibbon Tours or Hoolongapor Gibbon Sanctuary. Each of these wonderful protected areas are different and home to different species, whilst in Kaziranga we will be focuses on the large populations of Indian one-horned rhinos, Asiatic elephants, tigers, smooth-coated otters, swamp francolins, great hornbills and many more species of mammals and birds. Whilst in Manas national park we will search for many of the same species as well as water buffalo, endemic bird species and with some luck nocturnal species such as brown fish owls, hog badgers and pythons. During our safaris of Kaziranga and Manas you will be exploring the park in open 4×4 jeeps and from elephant back whilst in Hoolongapor Gibbon Sanctuary you will be guided around on foot. This is the best way to explore the dense forest and also an excellent way to see the only ape of the Indian Subcontinent (and also in the worlds 25 most endangered primate species) the Western Hoolock Gibbon. We also have the option to stay inside the park where we can spotlight and hopefully see an even more elusive primate the Bengal slow loris.

During the mating season, male lions will mate with the pride females around 50 times per day