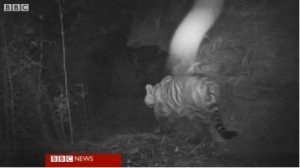 Tiger Conservation hasn’t really caught many breaks in the past,  but now it has: A BBC camera crew has taken footage of a ‘lost’ population of tigers living in Bhutan, at higher altitudes in the Himalaya than any other known tiger group, and they appear to be successfully breeding.

Intrigued by stories from Bhutanese villagers that tigers may be living up to altitudes of 13,000 feet, inhabiting places well above their normal lowlands habitat, Alan Rabinowitz of conservation group Panthera teamed up with a BBC film crew to determine if the stories were true.

Three months after setting camera traps at 9,800 foot and 13,450 foot elevations, the team discovered the tigers they were seeking at both altitudes. Both a male and female tiger were filmed, making it the first hard evidence that tigers are capably of living at such heights. It also means that the location is the only place in the world where leopards, snow leopards, and tigers live side by side.

The exact locations of the tigers is not being revealed to protect them from poachers.

Bhutan Could Act As ‘Tiger Nursery’
From a conservation perspective, the big deal here is that this discovery helps significantly with developing what Panthera calls a tiger corridor along the foothills of the Himalayas in India, Nepal and Bhutan, and on into Myanmar. That would eventually connect with another corridor though Thailand, Laos, Cambodia, and Malaysia.

Since it’s now been confirmed that tigers can live at high altitudes, large areas of the Himalayas previously thought too high for tigers can be included in the corridor.

As one of the BBC producers filming the tigers says, “Bhutan could act as a tiger nursery from which tigers could breed safely and spread out to repopulate forests of some of the surrounding countries.”

Panthera on the Tiger Corridor

Severe fragmentation of present-day tiger habitat as well as the existence of one extant island population, mandates the design of several tiger corridors. The largest and most expansive corridor being considered by Panthera is the multi-national Himalayan-Indo-Malayan corridor, potentially connecting tiger populations from Nepal into Bhutan and Northern India through Myanmar, Thailand, Lao P.D.R., Cambodia, and terminating in Malaysia. Other important genetic corridors include a bi-national China-Russia Tiger Corridor, connecting Siberian tiger populations of Sikhote Alin, Russia and Heilongjiang and Jilin Provinces, China, a national tiger corridor through the island of Sumatra, and several possible Indian corridors, particularly the Western Ghats of Karnataka State.

Even if Tigers Forever and other tiger conservation initiatives are successful, the greatest hope against extinction of this species will be the ability of young, dispersing individuals to make their way to other tiger populations. As with other large, wide-ranging species, a long-term conservation strategy must go beyond isolated protected areas and plan for ways in which animals can move and survive in human-dominated landscapes. The Tiger Corridor Initiative is a daunting, highly ambitious plan. It is well suited to one of the world’s most daunting, magnificent wild creatures.