India has numerous wonderful national parks that are rich and diverse with wildlife, tigers dominant the Central Parks and Tiger Reserves of Madhya Pradesh but there are many more top predators and large mammals to be found here. Arguably the best national park to experience on an Indian Wildlife Holiday and see these predators is Kanha National Park, here a large population of tigers is complemented by dhole (Asia’s hunting dog), leopards, sloth bears, Indian wolves and golden jackals. As well as the smaller and sometimes very seldom seen carnivores such as jungle cats, rusty-spotted cats, honey badgers, common palm civets, large Indian civets, small-spotted civets and various mongoose species. Whilst many of the species are strictly nocturnal and very hard to see we do have a great track record when it comes to seeing some of the larger species on our tours here. 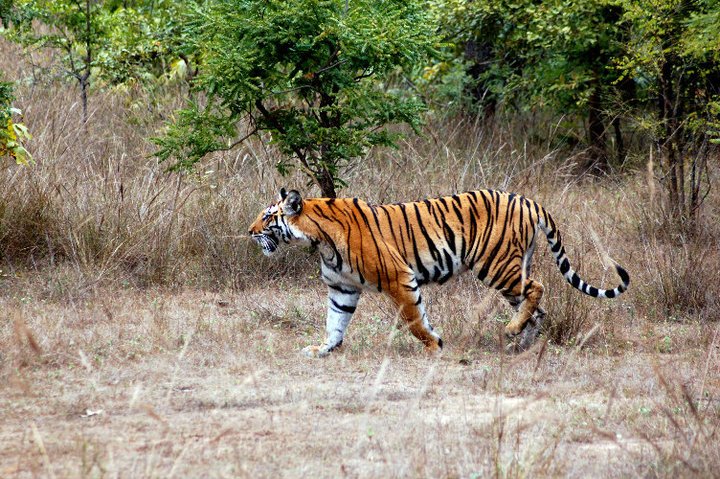 We have developed an eight night Indian Tiger Safari to Kanha National Park which includes 9 jeep safaris, delving deep into the park and with the help of our expert guides and professional zoologist escort (who is a big cat and mammalian predator expert) we have a great chance of seeing tigers, dhole, leopards, sloth bear and golden jackals. We head out in the early morning and late afternoon to some of the places where dhole and tigers are known to hunt and rest. The dhole are far more active in the morning than any other time of day and with tigers (like most big cats) being more active in the hour or so before sunset we focus more towards dhole in the morning and tigers in the afternoons. However our guides read the environment, listening to alarm calls and following tracks to find as many of the wonderful species that can be found here.

The joy of Kanha is that along with the common species and species that can be seen in other parks throughout the Indian Subcontinent (such as tigers, chital, sambar, wild boar and gaur) there are good populations of endangered species such as dhole, sloth bears and barasingha (swamp deer) that are seen here better or very well compared with other national parks. So if you would like to get an overall view of the wildlife of Central India and also to get good views of the countries top predators we would fully recommend a Safari Holiday of Kanha, one of the other aspects of Kanha that make it such a good Tiger Safari destination is its proximity to other national parks in Madhya Pradesh. If you would like to expand of standard Kanha Tiger Safari Holiday then it is easy to add extensions to nearby parks such as Bandhavgarh, Satpura, Panna, Pench, Tadoba and also to further afield parks like Corbett, Gir, Kaziranga.

If you are interested in getting more information about our Tiger Safaris in general of our Kanha Safari itinerary then click on the links on this page or Contact Us and we will provide you will any information you require.