How Drones are Helping Conservation

Back in 2016, during the peak of the African rhino poaching war, field rangers throughout Kruger National Park, South Africa saw sobering scenes day after day. The field reports showed just how bleak the situation was. With one log entry described discovery of “an adult female white rhino carcass … suspected to have been shot by the same poachers that killed the male, but both her horns were found intact and registered. The carcass was also estimated to be about 5 days old.”

40 such rhino carcasses were found in just one week in Kruger National Park and this was by no means an isolated occasion. But just five years later, these scenes are playing out with less frequency, but still happening at unsustainable rates unfortunately.

Robert Miller, the founder of The Eye Above Anti-poaching Drone Project in South Africa sais: “The government will tell you that the number of poaching incidents has decreased. Therefore, we’re winning the war on poaching. What they’re not saying is the rhino population has crashed to such an extent that it’s becoming harder to find a rhino to poach.”

There are two rhino species found in Africa which are the white rhino (Ceratotherium simum) and the black rhino (Diceros bicornis). White rhinos are classified as near threatened by the IUCN, with about 18,000 individuals left in the declining population. In Kruger National Park, once believed to house the largest white rhino population in the world, the population plunged by 67% between 2011 and 2019 due to poaching. Black rhinos are listed as critically endangered, with approximately 5,500 individuals, although their numbers are rising (slowly).

Poachers have devastated the populations of iconic species like rhinos as they are merciless in their pursuit of rhino horn and these amazing animals are slow breeding and slow growing species which only produce one offspring at a time and so find repopulating areas quickly very difficult. Only with sustained help from people can the rhino be afforded the time and protection in which to recover its numbers substantially. With national parks and conservation areas covering large swaths of land, anti-poaching efforts are far from easy. And over the past few years, this has led some to look for a new weapon in the war: drones.

But experts say the drone technology isn’t quite there yet.

Drones are a tool in the anti-poaching toolbox, but they aren’t a silver bullet, says Graham Dyer, a former ranger and drone operator in Kruger National Park.

The rate of poaching during 2015 and 2016 was devastating with an average of 3 rhinos killed every day in South Africa alone. Although the poaching rate has dropped since then, the numbers are still staggering. For example in 2020, the number of rhinos poached in South Africa was the lowest in a decade, down to fewer than 400 a year, or one per day, most likely due to travel restrictions imposed in response to the COVID-19 pandemic.

But the extent of the killings isn’t completely clear, as governments often keep these numbers a secret, says Niall McCann, the director of conservation for National Park Rescue, a direct-action conservation organization in Zimbabwe. Disclosing everything could lead to reductions in international funding if the current conservation measures are not being deemed to working and also there is corruption to the highest levels unfortunately.

Governments don’t want to advertise to the world that they’re struggling to control their borders, poachers or crime, McCann says. They also don’t want to draw attention to where the animals are or that they have a poaching problem. 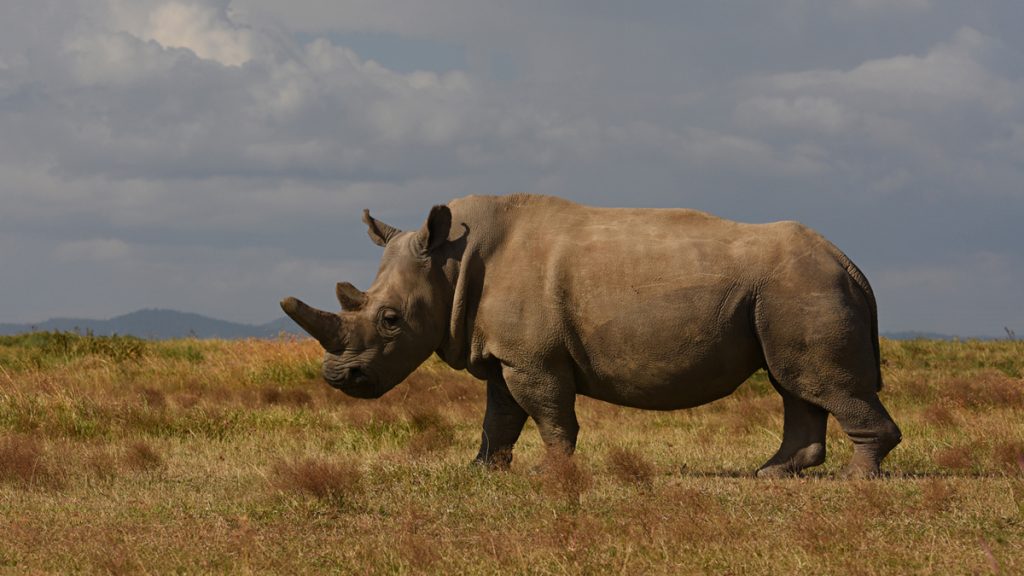 Poaching is a worldwide systemic issue driven by different motivations, McCann says. Locally, some people poach animals for subsistence. Another issue is illegal poaching for commercial markets. But there is also the classic, “high-value” poaching, where poachers target high-profile animals like rhinos, lions and elephants, primarily for their horns, claws or tusks. In the case of rhinos, poachers are after the horns for long-debunked medical uses or as a status symbol in East Asia. McCann says China is the biggest consumer market for these kinds of product.

Anti-poaching potential
With the technology advancing quickly drones might be one of many tools to aid the fight against poaching, Miller says. Current drones in use are mostly 3D printed. They also implement machine learning — i.e. they can be “taught” to use a combination of both visual and thermal technologies. For example, in South Africa, the temperature of the ground can be about the same temperature as a human body, but by using a combination of thermal and visual technologies, the operator can identify a human standing in front of a rock.

The drones that conservationists are testing are quiet and can fly long distances. Kruger National Park covers more than 19,600 square kilometers (7,500 square miles) — more than double the size of Yellowstone National Park in the United States. And the animals prized by poachers, like rhinos, are constantly roaming.

Even if there are a “thousand rangers on the ground in Kruger, they’re not even covering a fraction of the park,” Miller says.

Although drones can provide “eyes,” they can’t arrest or put handcuffs on the poachers, Dyer says. Rangers still must pursue and catch the poachers.

After some delays due to the pandemic, Miller’s team plans to launch a new set of drones with the latest technology in the coming weeks. But, he says, there is still no coherent plan to integrate drones with ground-level anti-poaching efforts yet. 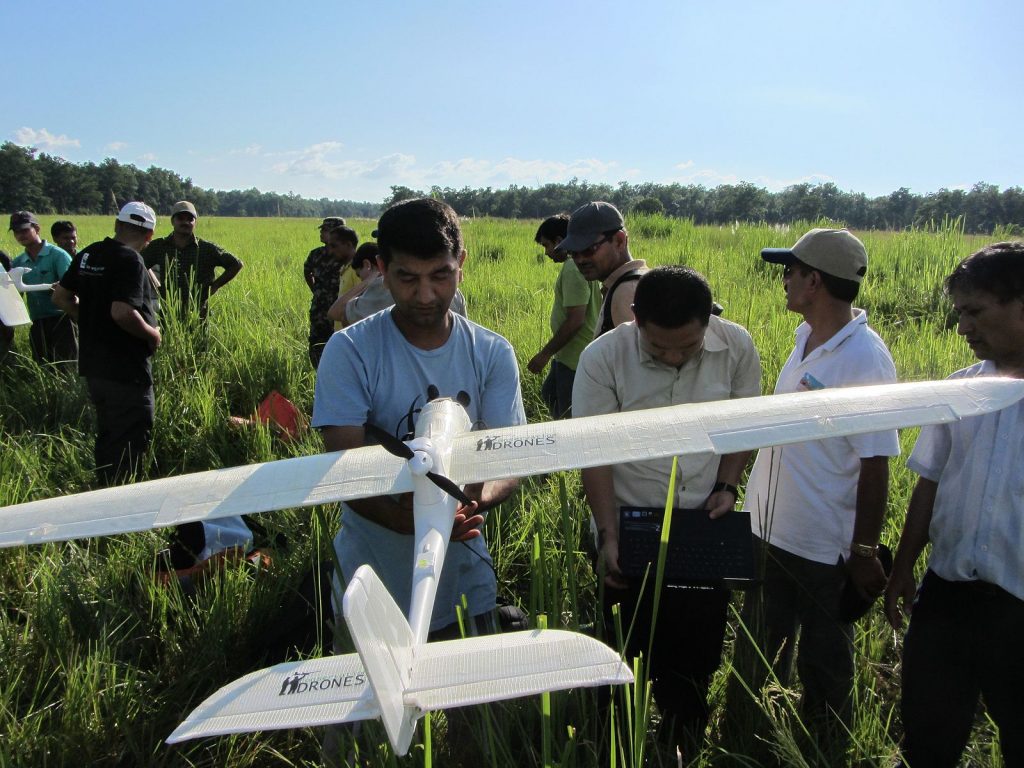 Conservation Drones in use. Photo by Cliffspiration, CC BY-SA 4.0

Dyer compares the effectiveness of drones with canine teams that he saw while working as a ranger, noting two problems that were solved by dogs that can’t be solved with drones. Canine teams were able to chase down the poacher until they climbed a tree. Rangers tracked the dogs’ locations and then apprehended the poachers when they got to the scene.

In one week, the canine team handcuffed 18 poachers “with obvious evidence,” Dyer says. “And it just kind of brought it home to me. We had not seen more than 12 poachers in a whole year.” The details of these kind of efforts are kept under wraps.

But drone may be more than just eyes: they could improve the tough working conditions for rangers.

“It is not easy to be a ranger on the ground because of the dangers involved, especially for ladies,” says Anita Mudenda, a member of the Mucheni community and ranger in Chizarira National Park in Zimbabwe. Rangers spend days out in the bush in extremely hot, muggy conditions, always on high alert.

But with the drones doing the spotting, “life would be much easier for us as most of our duties will be spent on reaction patrols,” Mudenda says.

Other risks to the rangers come from the poachers themselves. For a poacher to kill a rhino, they need a high-powered rifle, which means they’re likely to be well-trained, financed, and may use violence to avoid arrest, McCann says.

On top of these, rangers also have to worry about being attacked by animals, Mudenda says.

Although drones aren’t a silver bullet, they still hold a lot of potential, especially in smaller reserves, Dyer says. Knowing drones are overhead can help deter poachers in the first place. For instance, in October 2014, Dyer surveilled the Pretoriuskop area in Kruger National Park for six weeks. The previous month, poachers there had killed nine rhinos. When the drones were airborne, there wasn’t a single recorded killing.

Drones can also quickly assess a threat before rangers go out to check, Dyer says. For example, if something triggers an alarm on a boundary fence, a drone can quickly fly out and see if it was a poacher or an animal.

Dyer says drone technology may one day get to a point where the silent, flying machines can successfully patrol from dusk to dawn with little to no human intervention.

In the meantime, the most successful way to tackle the poaching problem is through community involvement and education, he says.

Rhino horns are made from keratin, the same material as human fingernails, and have no medicinal purpose, Dyer says. It’s important to educate people and give them resources to show that rhino horns are of no use to humans.

The local community should also be the first line of defense, says McCann, who adds that it’s vital to engage the community, get them to participate through informing, self-policing, and employment.

People need to have a tangible benefit from the conservation activities that are happening,” McCann says, adding this will empower community members to discourage their neighbors from committing illegal acts.

Conservation awareness efforts should also target schools “so that kids grow up knowing that poaching is not good for the world,” Mudenda adds.

“We deem our lives so precious, so are the animals.”

Bees have five eyes, three small one on the top of their heads and two large ones on the front