Within this section of our website you can find information about our company, employees, history of the company, what we’ve done, where we’ve been, who we took and what they said!

If there’s any more information you’d like to know before booking the wildlife holiday of your lifetime with Royle Safaris, please feel free to drop us a line, we’re always happy to answer any questions you might have.

Royle Safaris operate some of the most specialised wildlife holidays and wildlife tours which are professionally organised, escorted and guided in the world. With focuses from birding holidays, whale watching, shark diving, primate watching, bear watching, big cat safaris, marsupial spotlighting, reef snorkelling and diving, tiger tours and the classic mammal watching safaris of Africa we have tours that are tailored to every wildlife enthusiasts’ needs.

Based in a village in Cheshire in the North West of England, we are a family run business which spends most of the time out on safaris, conducting tours and holidays as well as researching new and excited itineraries. Being a relatively small company means we can be personal and tailor any tour to any requirement. Our guests regularly comment on our personal approach and enjoy having a personal escort with you on our tours. We also have a high percentage of repeat guests (75% of our guests have booked more than one tour with us and are committed to coming back to us in the future), we have even arranged wildlife holidays for people to places which they didn’t think were possible to get to – our Secret Cats of the Amur tour (due for 2012) was completed with great success for a big cat watching enthusiast when they half jokingly enquired about seeing Siberian tigers!

All our tours are designed and researched by dedicated wildlife lovers, zoologists and experienced travellers and as a result they are full of amazing wildlife activities, competitively priced and offer unique aspects which you would struggle to find provided by another wildlife holiday company. For more information regarding these unique aspects of our tours see Why Choose Us and the individual tour itineraries.

We are dedicated to using local experts and enthusiasts who work tirelessly to understand, research, observe and conserve the endangered and wonderful wildlife on their doorstep. Whether it is trekking in the Rumbak valley tracking snow leopards or being guided through dense rainforest to sit in the presence of wild mountain gorillas, our wildlife tours and safaris all utilise local guides who have knowledge of their area and wildlife which is far better than anyone else. But in addition to these local guides we send a professional zoologist (who specialises in the group of animals the tour is focused on) along you understand the behaviour you see and gain a full appreciation of the wildlife on show. The zoologist will often bring along some cutting edge wildlife watching technology such as camera traps, underwater cameras, hydrophones, high powered spotlights, heat sensitive binoculars as well as a comprehensive range of field guides and documentaries which aim to increase your knowledge of the area and the wildlife you are here to see.

You can also be assured that you will be making a difference to the environment and wildlife that you will be travelling to see. As part of our continued commitment to conservation and research throughout the world we donate money for every person who participates on our tours to a host of organisations around the world. By clicking on any of our affiliate logos on this page you can learn about the great work they do and how Royle Safaris helps them and how you too can make a difference.

We are always ready to help with any questions or queries you may have; even though we may be out conducting or researching tours there is always someone in the office to help.

Royle Safaris are proud to showcase the wonders that we come across during all our wildlife expeditions. Click on the image to go to our Wildlife Gallery.

No tour and no wildlife encounter is too remote or too unusual for us.

We dedicate ourselves to organising the ‘stranger’ wildlife watching holidays and you will find a lot of ground breaking tours offered with us and no one else such as our gibbon watching tour of Bangladesh, or exclusive trip to see the beaching orcas in Patagonia and of course the trip to Russia’s far east in search of cats which are deemed as more spirits than reality by the locals of the region. 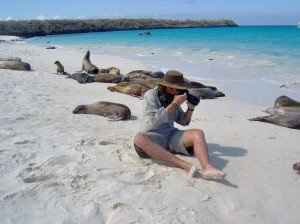 Since graduation from The Victoria University of Manchester with a degree in Zoology Martin has been fortunate enough to spend most of his adult life travelling the world and working in a plethora of wildlife projects. With a life long passion for the natural world and thirst to learn and experience as much as possible he has set this company up with the overall aim of highlighting some of the most endangered animals and ecosystems in the world with a view to helping raise awareness of these animals and ecosystems; not just to the people who enjoy our tours but the local people we help by employing and educating as a long term commitment to help the sustainable development of eco-tourism around the world.

Although Martin would admit that elasmobranchs (Sharks and Rays) are his overall passion, he has worked on a great range of projects all over the world with many different kinds of animals including: 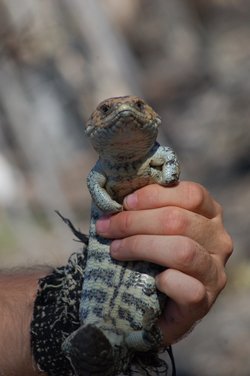 During this time he was involved in the conservation of various endangered reptiles and amphibians which has lead him to want to track down and find some of the overlooked of all animals; namely the reptiles and amphibians of the world. Our tours to Australia and specifically the Wild Western Coast and Extreme Territory are excellent places to find some of the cutest and charismatic of all reptiles and amphibians. Such as this bobtail skink which was picked up and removed from a busy highway in Western Australia. This reptiles are known to mate for life and show immense devotion to their partners including waiting by the body of their dead partner until they starve themselves; showing what some scientist believe is as close to grief as any reptile has every shown. 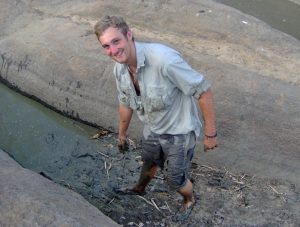 During this time Martin was trained comprehensively in field guiding techniques used in Southern Africa; including animal tracking, 4×4 driving, weapons handling, approaching dangerous game, identification of plants, birds, reptiles, amphibians and mammals. This is among the most important training and experience Martin has received and is evident in the way he conducts each and every safari. 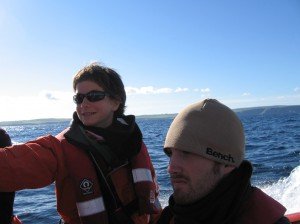 During this time Martin gained his first experience working on the sea, this gave him the thirst for marine life and he has vast knowledge of cetaceans (whales, porpoises and dolphins) and elasmobranches (sharks and rays) which feature heavily in many tours we offer. Including watching minke whales and basking sharks off east and west Scotland. 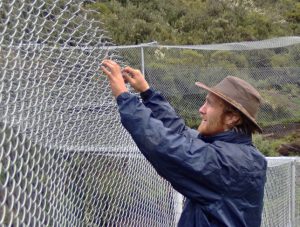 The Andean Bear Project with Spectacled bears: http://www.andeanbear.org/ During this period Martin learned valuable skills in long distance tracking and identifying wildlife. Working high the Andean Mountains he has visited some of the most remote and beautiful areas of South America which he now wants to showcase to people in the search for the elusive and highly endangered Spectacled bear. 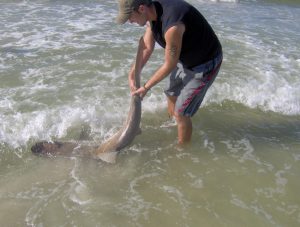 The University of Cape Town on a pHD project regarding the predator evasion behaviours shown by Cape fur seals when being predated by Great White sharks.

During this time Martin fulfilled a life long ambition and got up close and personal with Great White Sharks as well as other species including the pictured Bronze Whaler which was caught in a net and released by Martin after being tagged and measured with the data being sent to the Oceanic Research Institute. 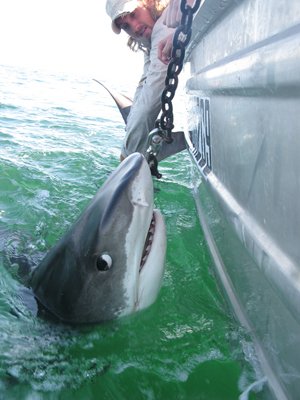 This time was incredibly insightful to Martin as he gained first hand experience working with a vast range of animals and plants from sea grass, benthic invertebrates, reptiles, fish, birds and mammals such as sea snakes, sharks, rays, dolphins and sea turtles. This also showed Martin a huge area of Western Australia which is rarely on itineraries of other British Wildlife holiday companies. 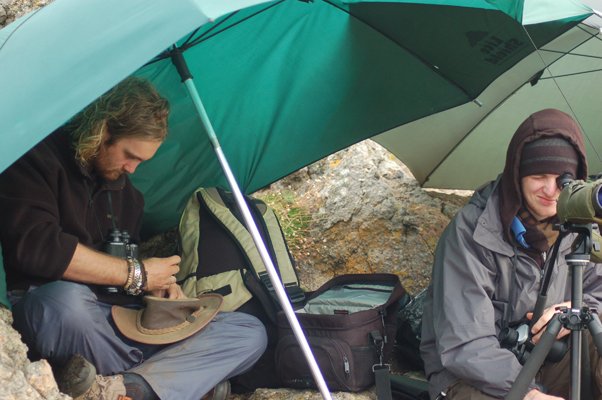 SeaWatch South West on a pHD project regarding the presence of Basking sharks and plankton concentrations during the British summer/autumn: http://www.seawatch-sw.org/

During this, the most recent time spent on a research project, Martin has learned more about birding and the means of identifying birds at distance than on any other project. This is a valuable skill for the birding holidays we offer.

During all these projects and years spent travelling the world and going into many national parks he has developed a real sense of what is required to find, observe and understand wildlife in the field. Never being able to stop he is currently working on a number of private projects including writing A Field Guide to Batoids of the World (Skates and Rays) and an ambitious plan to have an international database for fellow wildlife enthusiast which will hopefully make finding animals in the field easier.

Most of our tours are conducted in the presence of Martin which ensures a number of things, firstly that the director of the company has a direct influence on the quality of the holiday and you gain is wealth of experience and knowledge to accompany you on the tour.

If you are yourself conducting field research and feel like Martin would be a help to your project in terms of data collection please get in contact and we will see if we can come to some arrangement. 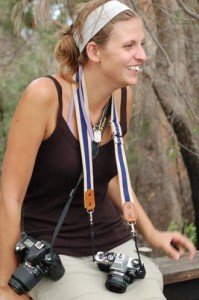 Kate Ainsworth is a lifelong lover of the natural world, travelling and photography so when opportunity came along to combine all three; she jumped at the chance. Having travelled the world and extensively explored Asia and South America she has a great input when the designing of itineraries is done. For a small fee on top of your holiday cost you can hire Kate’s services to document your wildlife holiday. With an eye for the amazing and a skill in capturing ‘the moment’, Kate is a great asset and one that combines a love for landscape and environmental pictures with animals as a focus. This often leads to a completely unique aspect to her work and often well photographed subjects appear brand new in a different light. All in all Royle Safaris feels very privileged to have Kate’s services and we would like to share her photography skills with you on our tours. The majority of the pictures on this website and in our brochures and leaflets are examples of Kate’s work.