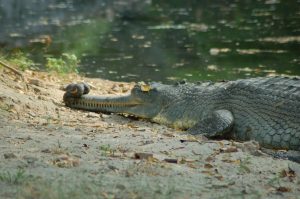 Find Gharial in India on our Herpetology Tours

After receiving several reports of unusual sightings of Gharial in the eastern Hooghly District on the Ganges, a couple of conservation organisations went off in search of the crocodilian, and with support of a local government body of Hooghly & Burdwan district carried out an special expedition in search of Gangetic Dolphins and Gharials and in the river Hooghly; with the aim of potentially setting up a new Gharial and Dolphin Conservation Reserve.

To their amazement and joy, they recorded over 40 gharial sightings and photographed 2 large, breeding females. They also found several, newly hatched gharials and have estimated that this population probably numbers between 150-200; which constitutes a large percentage of the population.

Gharial sightings
Over the course of the 3 month survey 4 regions of “maximum gharial occurrence” were identified. Amongst the sightings were reports of 1ft long babies to 17ft males, and more than 10islands with potential nesting and basking grounds were also identified.

It is now crucial to identify and protect all suitable breeding habitats for these newly identified populations and existing gharial populations, if they are to have a chance to survive and flourish. So this study necessarily includes an assessment of the extent and quality of the gharial habitat.

Threats to Gharial
There is heavy human traffic from fishing and other boating activities in most if not all of gharial habitats throughout the Gangetic plain, which is the main reason behind the difficulty in spotting gharials during the day in India. The high level of human activity has created human/gharial conflict; due to the perception that the gharials might, as with other crocodiles, pose a danger to humans directly. Extensive fishing is also known to have caused several deaths as gharials have become caught up in the nets, and extensive fishing has also lead to the decline in prey abundance. Also the destruction of sandbanks for the use in brick factories and industrial pollution are also threats, as the gharials have less and less suitable nesting and basking habitats.

Gangetic Dolphins
During the survey we were also looking to spot and record Gangetic dolphins; amazingly 36 Gangetic dolphins in total over the 170km stretch of river. At 6 locations in the study area congregations of between 4 and 11 dolphins were observed.

If you are interested in trying to find both Gharial and Gangetic River dolphins then check out all India Wildlife Holidays and Nepal Wildlife Holidays for more information on how to see these magnificent and critically endangered animals in the wild.